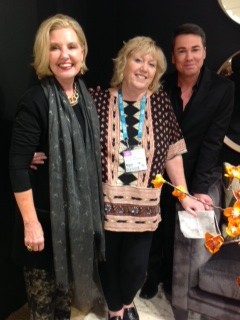 Laurie and the gang just returned from another exciting time in North Carolina, where attendance was deemed light but the buyers present were active and bought robustly.

The journey began on a Thursday and it was action packed… as is often the case with Laurie and Sydney’s forays out.

Early that morning Laurie’s Merrill Lynch guy Peter had a brand new baby boy, so she made a quick trip by the hospital to ooh and ah and welcome the new bundle of joy, Cameron. Then it was off to the airport for a run down to Charlotte, NC.

Somewhere along the way, “Auntie” got bit by a dreaded black widow or brown recluse spider. Her arm swole’ up like half of a pumpkin… so off the plane straight to the emergency room at Charlotte’s First Presbyterian Hospital. Of course six minutes there proved too long a wait so an emergency text to Dr. C. Lee (Oncologist and insect wrangler) and a quick call into the 24 hour pharmacy took care of the “problem”. It really was scary…

Buying started the next morning at a favorite niche upholstery supplier where Allison and Frank out did themselves with new frames and display ideas. The team also bought well at Lee, Sherrill, Century and Bernhardt later in the week.

Laurie loved the new lamps at Couture, Gabby and Regina Andrews. Tons of new chandeliers at Currey. Truly one of her fastest growing categories. Traditional, transitional and even a bit of modern.

The new industrial goods found in The Suites of Market Square were very exciting and a new leather supplier was unearthed. Great dining room groups. Leather benches and ottomans. That container (buy big or go home) should be shipping to Tomball by November 7. Well priced. The designers will be able to purchase and schedule installation BEFORE Thanksgiving. It was a hard source to find. Laurie’s will be the only ones in town with these items! Yeah!

Art was bought by the tonnage…really. Lauries’ does get 10 to 15 pallets a week! This is no exaggeration. The walls are a big category here in Tomball… it is the most challenging for both Laurie and her installers to keep up with. We certainly are the biggest supplier in Tomball or maybe planet earth. 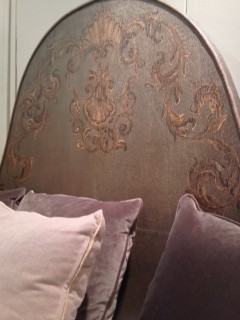 Containers were bought from VanThiel, a Dutch influenced niche designer, as well as tiny supplier Pennisulas’ hand painted goods out of Argentina. Now neither of these boys get in a big hurry to ship… but it is always worth the wait (and aggravation) when these things spice up the store after the first of the new year. Laurie will be adding a Ralph Lauren Home Gallery 2015. Stay tuned for those details! These goods are none too cheap… but oh are they fabulous!

Rugs to tie all the groups together finished off the whirlwind trip.

Laurie and Syd indulged in cheese fries and calamari in the airport lounge as they congratulated themselves on another productive, tiring, but fun trip to the furniture capital of the USA!

It won’t belong before you can come enjoy the fruits of their labor… Stay Tuned!