Who she is: Nancy Roberts

What she does: H 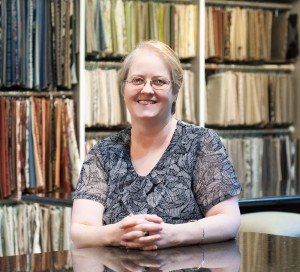 uman resource manager, accounting manager, customer service manager, office manager – heck, just call her manager of pretty much everything not managed by Laurie. She’s also one of those fast-moving managers you’ll find flopped on the floor answering questions instead of behind some desk in a fishbowl of an office.

Nancy’s Story
Nancy is a manager, but she’s clearly a mermaid, too. And she had absolutely no clue she’d be falling in love and marrying a guy she recently met over a plate of fish.

That’s right. Nancy is engaged and getting married to a dude who made the most amazing catch after casting his net back in April. The wedding date will most likely be set as August 8, due to Nancy’s strange obsession with that number.

“The number eight is significant. It’s a never-ending number,” she says, making a not-so-subtle nod to the everlasting love she now shares with a man named George.

George and Nancy first met through mutual friends, one of which is a coworker of Nancy’s at Laurie’s. Vickie introduced the two and set a double-date for the delectable Rockfish restaurant on April 9. (This is where the plate of fish comes in.)

All went so swimmingly that George called Nancy a few days later to ask for second date. Nancy didn’t take the bait, not because she was necessarily playing hard to catch, but because she already had plans. So they set their second date for April 15.

“And we’ve been together ever since,” Nancy explains.

The rest is history, as they say, or at least it is if you know George proposed on May 25.

Both are awash with excitement over their upcoming wedding. Their fish-initiated courtship lasted all of six weeks, and for nearly two of those weeks Nancy had been out of town visiting her hometown of Seattle.

“That’s why my cell phone bill was so high that month,” she laughs. Just wait until she gets the wedding bill!